After much travel to different conventions, it’s time for me to lock the doors, play games at home, and get back to posting game overview videos on a regular schedule, starting with a long take on Man muss auch gönnen können, a complex roll-and-write game from Ulrich Blum, Jens Merkl and Schmidt Spiele that debuted in early 2020 and that feels like the descendent of Wolfgang Warsch’s Clever pair of dice games.

I’ve already presented a quick take on the game in an episode of The BGG Show, but now I’ve played the game twice as many times — six total — with a variety of player counts on a review copy from Schmidt Spiele, so I thought I’d go into more depth on this item that’s available for shipping to your hidey-hole via Amazon.de. (Warning: If you search Amazon.de for “man muss auch gönnen können” without including the word “spiel”, the search results will present you with hand towels, a garlic press, and an assortment of string tanga, but not a single game.)

I’ll let the video below do most of the presenting, but in brief Man muss auch gönnen können is a roll-and-write that challenges you to (1) acquire the scoring and action cards upon which you’ll write, (2) complete the dice combinations on those cards in order to activate them, (3) figure out when best to use the few bonus actions that you’ll acquire, (4) maintain a balance between cards completed and cards in progress, (5) deny opponents the ability to mooch die rolls off you, and (6) race to complete all the cards you need before the game ends. 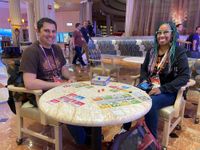 This game looks simple, but has a lot going on if you want to play well, and you will undoubtedly make poor decisions in your first game or two. Well, perhaps every game, but as your experience grows, you’ll learn better how to play the odds on which combinations might be completed on your turn as an active player, thereby giving away fewer goodies to others.

Yes, the game features lots of die-rolling, so in some ways you’re at the mercy of the dice, but as in many other dice-based games, you can make better or poorer decisions that will allow you to minimize the luck of the dice — or at least that’s what I tell myself after having won the five competitive games in which I’ve played. (I’ve also played one solo games, and I hit the target goal in that as well, but that playing came only after my other five game.)

For more details on how to play, the types of scoring and bonus actions available, and why you might have to be nice against your will, watch this overview: