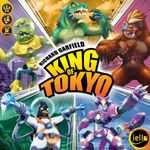 • Issue #72 of Creative Nonfiction, which was released at the end of 2019, features essays and stories related to games. You can find a table of contents and an introductory essay from issue editors Sasha Barab and Alan Gershenfeld on the magazine’s website.

• For the most part, games have one of three types of victory conditions: first, last, or most. In more detail, be the first to a goal, be the last one standing, or have the most of something. In a November 2018 article on Games Precipice, Alex Harkey examines these types of victory conditions in more detail, giving multiple examples of games that fall into the categories above, in addition to naming combinations of these conditions, e.g. “The Deathrace”, in which a player is trying to be the last one in the game or the first to reach a goal, as in King of Tokyo.

Can you name a game that features all three victory conditions? Harkey gives only one such example, and it feels like a bit of cheat given that it’s strictly a two-player game.

• In February 2020, the Star Tribune newspaper in Minnesota profiled Patrick Leder of Leder Games. An excerpt:

In 2016, Leder resigned from his data business analyst job at Macalester College. He had other things on his mind. “There was an understanding and I quit my day job,” Leder recalled last week. “I wasn’t into it anymore. They knew that and thought I should get going. I wanted to publish board games.”

And things are going pretty well.

Leder started noodling with board games in 2001 in his free time. During a period of unemployment in the early 2000s, he started designing a prototype.

“My brother once said that whatever you find yourself doing after three or four months of unemployment is what you should do for the rest of your life,” Leder recalled. “But I had to find another job. I hadn’t developed the right skills yet and my salesmanship skills were horrible.”

• Interesting to note that twenty-five years after its debut, Catan is still the ur-example of a modern board game as in this Boston.com article from February 2020 about Boston Celtics rookie Grant Williams’ favorite game. An excerpt:

To try to gain a better understanding of the game — and why a 21-year-old NBA player loves it so much — I asked Williams if he would teach me, with help from two reporters who already knew how to play…

While we played, Williams couldn’t help but tell stories from his time at Tennessee.

He recounted some of the custom rules they instituted, from future trades to blind trades to a shot clock. He remembered the time [teammate Brad] Woodson didn’t speak to him for almost a week and a half because he had cut him off in three straight games, thwarting his efforts to build. And the time they made a bet in which the losers had to prank call their coach, Rick Barnes.

• Catan and a stack of modern games were briefly shown in this Saturday Night Live clip that features an unsettling game of a completely different nature: